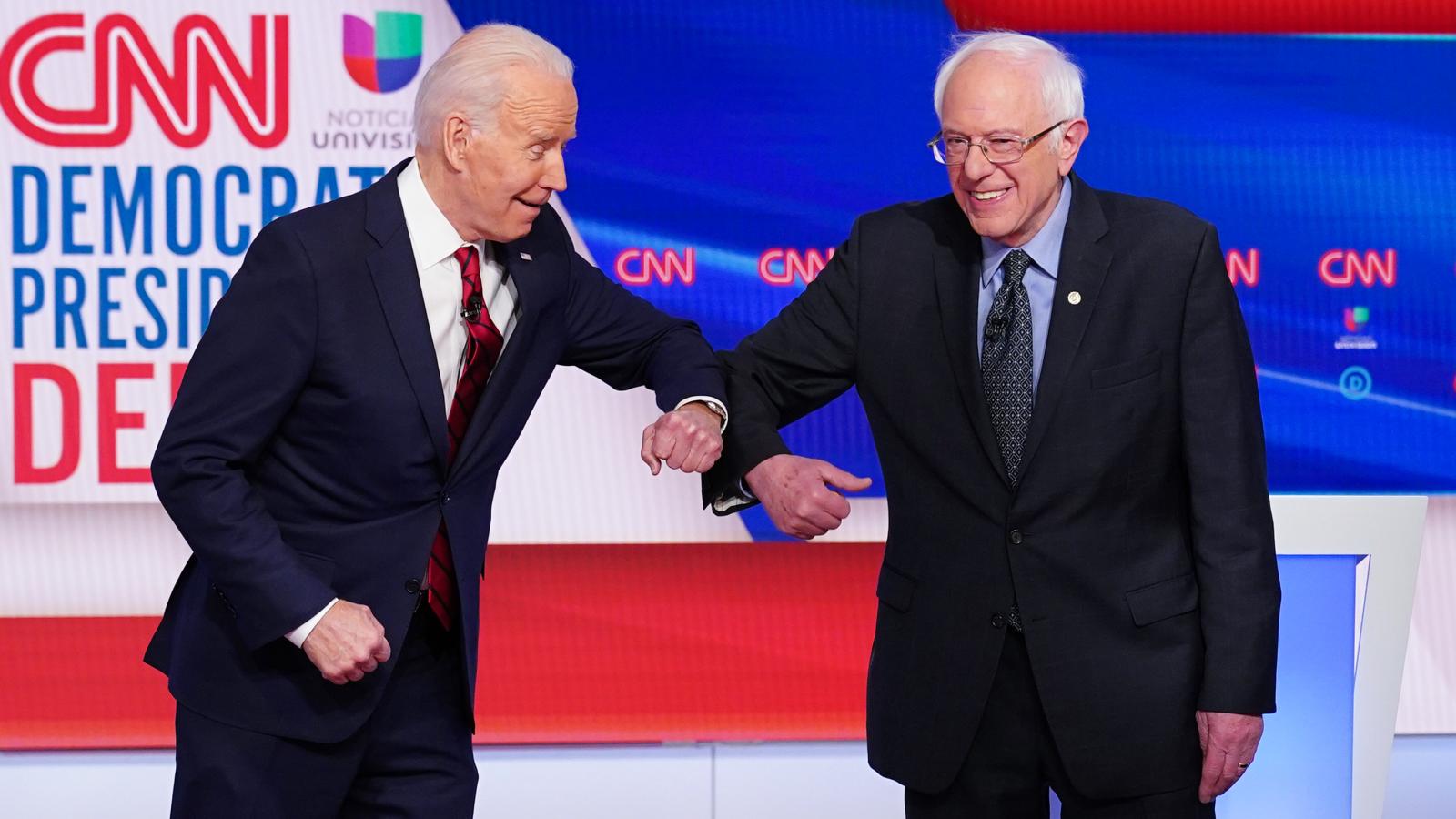 After a collegial elbow bump to start, Joe Biden and Bernie Sanders clashed Sunday night over the coronavirus crisis, healthcare, abortion, campaign finance and energy policy in a high stakes debate that could significantly impact the outcome of the Democratic presidential nomination.

Facing a daunting gap in delegates, Sanders slammed Biden as being inconsistently progressive, hitting the former vice president for his past votes opposing bankruptcy protections, gay marriage and public funding for abortion and in support of the 2003 invasion of Iraq.

Biden returned fire, attacking Sanders for the Vermont senator’s praise of some policies in despotic regimes like Cuba, China and Nicaragua. He also hit Sanders for prior votes supporting gun rights and against Russian sanctions. He also said Sanders failed to explain how he would pay for his signature  “Medicare For All” proposal.

“Everything I call for, I pay for,” Biden said.

The candidates rejected the traditional pre-debate handshake, per U.S. Centers for Disease Control and Prevention recommendations to avoid handshakes to avoid the spread of coronavirus.

The two candidates disagreed over whether companies affected by the coronavirus should be bailed out by the government, with Sanders defending his vote against the 2008 financial crisis and saying he didn’t believe corporations should receive a coronavirus bailout.

“People are looking for results, not a revolution,” Biden said in a shot at Sanders in response to the Vermont senator’s claim that the coronavirus exposed the need for massive structural changes to reduce income inequality.

"What you're talking about, Joe, is enormous loopholes," Sanders said in response to Biden’s policy prescription for the coronavirus.

The candidates sharply disagreed over energy policy, with Sanders claiming that Biden’s position on "No more new fracking,” without a ban on existing fracking enterprises and other climate change-related proposals didn’t go far enough.

"I know your heart is in the right place, but this requires bold, dramatic action," Sanders said. "Your plan does not do that."

Both candidates affirmed they would support the other man if he won the nomination. Biden committed to picking a woman as his vice presidential running mate and also to nominate a black woman to the Supreme Court. Sanders said he would put at least 50 percent women in his cabinet and while he wouldn’t explicitly say he’d choose a female running mate, he said “my very strong tendency is to move in that direction.”

More than two hours into the debate, Sanders had yet to question Biden’s physical stamina, even though he had previously done so by contrasting the length of the former vice president’s far shorter campaign speeches with his own. He also did not question Biden’s mental acuity, a factor raised by some Biden critics from both the left and right.

Sanders appeared to repeatedly confuse the coronavirus with the Ebola virus, which ravaged West Africa in 2014.

“We keep talking about Ebola up here, I got Ebola in my head right now,” Sanders said.

Sanders slammed "crooks" in the pharmaceutical industry, saying that they were in part bankrolling Biden's presidential campaign.

The two candidates onstage stood six feet apart, per recommendations from the U.S. Centers for Disease Control and Prevention, debate host CNN said, to avoid the spread of coronavirus.

Tonight's debate was originally slated for Phoenix, Arizona before a live audience, however, it was moved to studios in CNN’s Washington, DC, bureau without a studio audience.