Voting needs to be accessible and safe for Americans during this pandemic. Period. Thank you @SpeakerPelosi for supporting #VoteByMail. I am working to pass my bill to guarantee this voting option to all Americans.https://t.co/q0RQpzjhRm— Amy Klobuchar (@amyklobuchar) April 1, 2020

Democrats appear united in their push to use “social distancing” around coronavirus to move the country toward November mail-in voting, expanded voting dates or possibly even “drive-thru voting.”

Republicans suspect Democrats could be exploiting a health crisis for partisan gain. Some fear a rapid move to alter the general election system could result in the type of chaos seen at the Iowa Democratic Caucus in February.

“Democrats couldn’t even make a vote counting app work in Iowa and now they suddenly believe they can redesign the entire U.S. election system,” a senior Trump campaign official told Just the News. “Their attempt to nationalize our elections through one-size-fits all federal legislation is irresponsible. History shows that states struggle to implement comprehensive federal election legislation and their proposal would create more chaos by forcing states into changes that they cannot manage. Joe Biden just adds to the confusion by throwing out ideas that he hopes sound good, but he too is clueless on implementation.”

The general election is still seven months away, and epidemiological models suggest a fall outbreak would be far less severe and not require the extreme measures of “social distancing” seen today. Dr. Anthony Fauci, director of the National Institute of Allergy and Infectious Diseases, said on Monday at the White House that America’s response would be “orders of magnitude better” than the current pandemic. Yet Democrats seem intent on immediately locking in changes to in-person balloting.

House Speaker Nancy Pelosi (D-Calif.) said “we’ll probably be moving to vote by mail” due to coronavirus and suggested a new coronavirus stimulus package should include $4 billion to fund voting-by-mail.

Voting needs to be accessible and safe for Americans during this pandemic. Period. Thank you @SpeakerPelosi for supporting #VoteByMail. I am working to pass my bill to guarantee this voting option to all Americans.https://t.co/q0RQpzjhRm— Amy Klobuchar (@amyklobuchar) April 1, 2020

The House version of the $2.2 trillion coronavirus stimulus bill — which was ultimately rejected — would have required states “to send absentee ballots to every registered voter, requiring online and same-day voter registration, and expanding early voting by 15 days."

Likely Democratic nominee Joe Biden even suggested that states could provide “drive-in voting” for the November election because of the coronavirus pandemic.

Republicans are skeptical of these proposals, worried they could result in rushed, widespread electoral fraud through “ballot harvesting,” when paper votes are collected by third parties who deliver them to state officials.

Most states also lack expertise in administering vote-by-mail elections. Oregon and Washington state are currently the only two states with paper-only elections and no physical polling places.

“Democrats are attempting to use this crisis as a way to get wholesale election changes that fit their far-left agenda,” Mandi Merritt, national press secretary for the Republican National Committee (RNC), told Just the News.

“While the RNC of course supports efforts to ensure that no voters are disenfranchised due to emergency protocols, national vote by mail would open the door to its own set of problems, such as potential election fraud and ballot harvesting,” warned Merritt. “Imposing a new system onto states unnecessarily will result in significant problems in the November election, and it is critical we work to preserve the integrity of the democratic process.”

Gina Loudon, co-chair of the Women For Trump coalition of President Trump’s re-election campaign, said she was upset at what she viewed as trivialization of the voting process by Biden.

“Voting is a privilege,” Loudon told Just the News. “If anything, people should have to prove they are worthy citizens to vote instead of having it served to them in a drive-through line like a McDonald’s cheeseburger, or dropped at their door like a pizza. The right to vote is sacred and special, and we should honor it. It should be fragile and respected, and if you disrespect the law or our country, you should lose it. The Democrats are the party of voter fraud. So whatever the Democrats say about morality in voting is exactly how we can know what we don’t want to do.”

Loudon, author of “Mad Politics: Keeping Your Sanity in a World Gone Crazy,” said Democrats’ push for electoral changes amounted to goal-post-moving gimmicks by a party intent on destroying Trump.

“From motor voter to ballot harvesting, they have been stealing votes since about the time they decided the Constitution was expendable and voice-voted God out of their platform,” Loudon said.

Michael Toner, a former chairman of the Federal Election Commission, told Just the News that Pelosi’s far-reaching proposals were unlikely to come to fruition.

“I don’t see any realistic chance that Congress is going to act on a national level in this area,” said Toner, who also served as former chief counsel of the Republican National Committee. “Mitch McConnell’s made pretty clear and Senate Republicans have made pretty clear they’re not interested in action in this area. Assuming Congress doesn’t act, this will be a state-by-state struggle.”

Toner said that most of the other 48 states besides Oregon and Washington that do have physical balloting would be unlikely to move to mail-in-balloting, especially those states without unified Democratic control of legislatures and governorships.

“I think it is likely that at least one or two states join Oregon and Washington,” Toner said, pointing to either Maine or Hawaii as possibilities. “It’s hard to predict that with certainty, but it wouldn’t surprise me.”

Toner said in other states with either bipartisan legislatures or Republican governors, the Democrats are likely to push for balloting changes via court litigation. And states have a patchwork of various standards that created what Toner called a much more “cluttered” state of play.

“It will depend upon the particulars of each state’s codes, as well as regulations,” Toner said. “Some states may feel like they have more flexibility under state law, other judges are going to feel like their hands are tied.”

Toner said all forms of voting have their challenges, no matter what form a state selects.

“The devil’s in the details on these proposals, so you have to evaluate each one,” Toner said. “There’s no panacea here. There’s going to be challenges no matter what system you choose.” 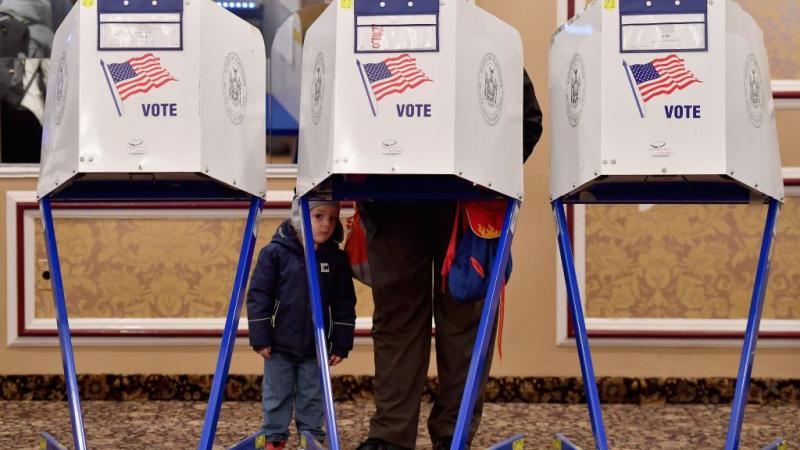