Georgia Secretary of State Brad Raffensperger told Just the News on Wednesday that he wants Fulton County elections taken over by the state under a new law that addresses localities with habitual problems counting ballots, dramatically escalating his battle with the state's largest urban center in the aftermath of the 2020 election.

"I think people are saying, enough is enough," Raffensperger said in a podcast interview in which he discussed using the new election integrity law known as Senate Bill 202 to have the State Elections Board take over the Atlanta-area election counting in time for the 2022 elections.

His comments came just days after Just the News published a 29-page memo written by Raffensperger's handpicked election monitor, Carter Jones, that outlined widespread mismanagement and irregularities in Fulton County during the November 2020 elections, including insecure transport of ballots, violations of voter privacy and double scanning of absentee ballots.

You can read that memo here:

Asked whether the state invoking the law to take Fulton County into receivership was an option he was recommending to the Elections Board, Raffensperger said: "Yes is the answer to your question."

"With SB 202, habitually failing counties can — actually the state election board can come in and replace the election director and really take over the governance of that," he said, noting Florida took similar action more than a decade ago and rectified problems in places like Palm Beach County.

Pressed later in the interview, he confirmed again he was recommending the Elections Board take over Fulton County.

"Is it your personal recommendation?" he was asked. "I just want to make sure I understand your approach. You believe the time has come for Fulton County to be taken over?"

"Yes," he answered, noting he has already recommended the firing of top Fulton County election officials, which the county declined to do.

Raffensperger addressed his monitor's detailed report of irregularities in the Atlanta counting center last November, saying that while Jones did not observe systemic fraud that could have changed the outcome of the election he did chronicle troubling mismanagement of the ballot counting process that undercuts voter confidence and lends itself to abuse.

"What he said was it's all this mismanagement," said Raffensperger. "The upside, positive note was that he did not see illegality or ballot stuffing. But all that mismanagement, dysfunction, what it does, it creates voter distrust, and it really lends itself to conspiracy theories. So it needs to be fixed. It's our largest county. And you know, people that live in Fulton County, like I do, I'm tired of it. But so is everyone else who lives in the other 158 counties."

"There's been progressives in the Justice Department for years that have been working on trying to stop election reforms that are common sense reforms, that make sure that we can objectively identify voters," he said. "You think about it, we've had photo ID for years in Georgia voting, and they said that was going to depress turnout. It didn't. We've had record turnout, record registrations." 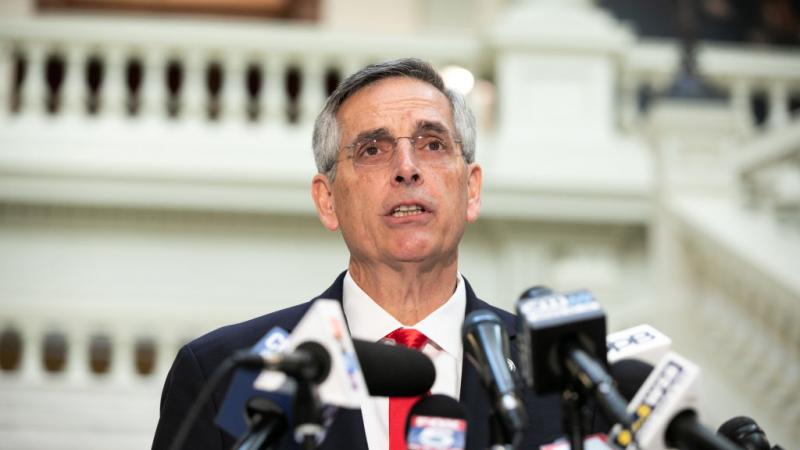