Former VP addresses some 3,000 members and activists of the Iranian resistance

Former Vice President Mike Pence on Thursday visited the headquarters of Iran's largest and most prominent opposition group to show his support for the Iranian people as they continue to oppose the Islamist regime ruling Iran.

Pence addressed some 3,000 members and activists of the Iranian resistance, 1,000 of them former political prisoners, at Ashraf 3, in Albania, home of the exiled People's Mojahedin Organization of Iran (MEK).

"I've traveled more than 5,000 miles from my home in Indiana to be here today because we share one common cause: the liberation of the Iranian people from decades of tyranny," said Pence. "The American people support your goal of establishing a secular, democratic, non-nuclear Iranian republic that derives its powers from the consent of the governed."

Pence also expressed support for the ongoing anti-government protests that have erupted across Iran in recent weeks.

"Every day it's clear [the protests] are growing stronger while the regime grows weaker," he said. "Today, teachers, workers, retirees are courageously taking to the streets. Protests that used to be isolated and sporadic quickly spread to multiple cities." 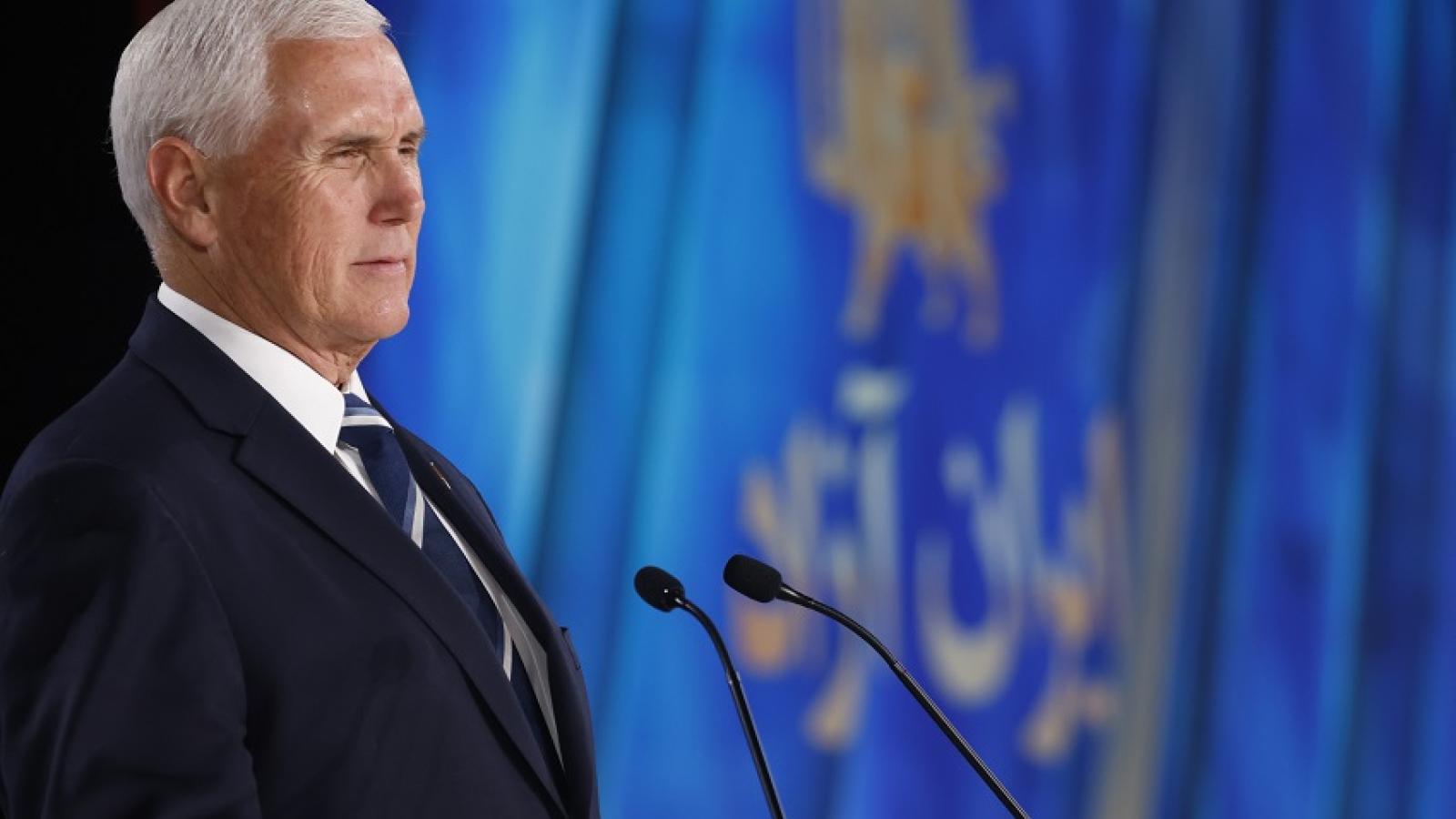 The rising cost of food and other staples earlier this month sparked sporadic unrest in several Iranian provinces. The demonstrations quickly turned political, with protesters decrying the regime — in many cases calling for its downfall — in addition to the higher prices. Forces associated with the MEK have been playing a prominent role in the demonstrations.

Iran's theocratic regime has responded to the recent demonstrations with a crackdown in a so-far-unsuccessful effort to quell the unrest.

Anti-regime protests have become common in Iran in recent years. In December 2019, for example, the U.S. government confirmed that the Iranian regime killed about 1,500 protesters as part of a crackdown by security forces on demonstrations the prior month.

In recent weeks, many protesters have called for the downfall of Iranian President Ebrahim Raisi and Supreme Leader Ayatollah Ali Khamenei, the ultimate authority under Iran's theocratic government, according to reports and videos posted to social media.

In his remarks, Pence castigated Raisi as a "brutal mass murderer" unfit to lead the Iranian people.

Raisi served as deputy prosecutor of Tehran, the Iranian capital, from 1985 to 1988, when he played a key role in the execution of tens of thousands of political prisoners, many of whom were members of the MEK.

In the summer of 1988, then-Supreme Leader Ayatollah Ruhollah Khomeini ordered the secret executions, and Raisi was part of a so-called "death committee" that carried out several or oversaw many of the killings.

"Today I join you in pledging that Raisi's crimes will not go unpunished," said Pence. "Ebrahim Raisi is unworthy of leading the great people of Iran. He must be removed from office by the people of Iran, and he must be prosecuted for the crimes against humanity and genocide that he perpetrated 30 years ago and every day since."

Pence also lambasted the 2015 nuclear deal as a "disastrous" agreement which enriched and emboldened the regime to continue engaging in aggression abroad and oppression at home.

The nuclear deal places temporary curbs on Iran's nuclear program in exchange for lifting large-scale sanctions on Iran. Former President Donald Trump withdrew the U.S. from the deal in 2018. The Biden administration has made it a priority to try to revive the accord.

"A renewed deal with Iran won't block Iran's path to a nuclear bomb. It will pave a path in gold," said Pence. "And a renewed Iran nuclear deal won't benefit the people of Iran in any way. It will merely empower and enrich a corrupt regime that has tormented and tortured the Iranian people for generations."

During his visit, Pence met with Maryam Rajavi, ‌president-elect of the National Council of Resistance of Iran, a coalition of Iranian opposition groups including the MEK, to discuss the situation in Iran and prospects for change. 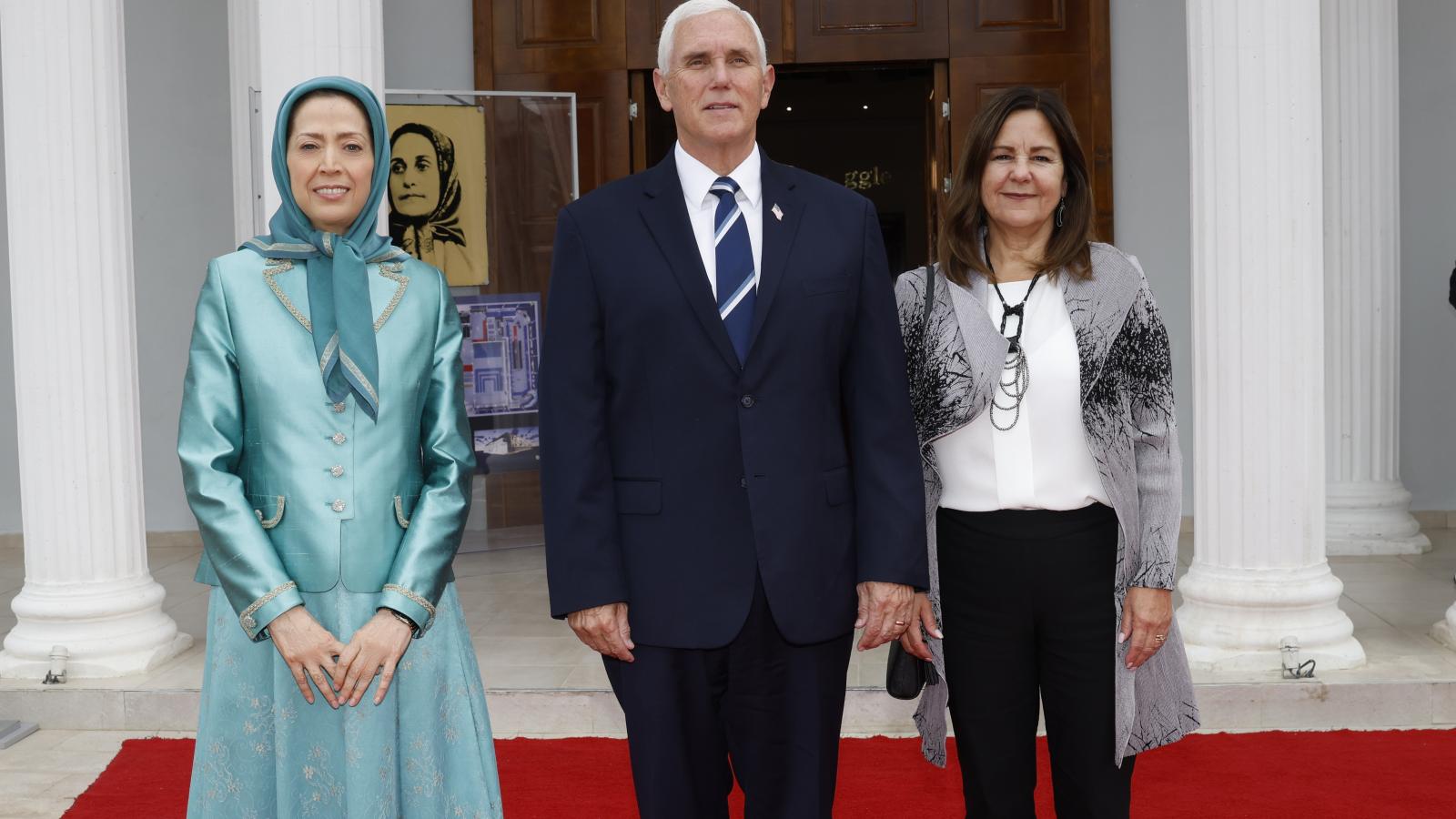 Rajavi said the regime is weaker than ever while the Iranian opposition only grows stronger, adding that a "policy of appeasement" from the West has failed and tougher action is needed.

Pence's visit came about five weeks after former Secretary of State Mike Pompeo traveled to Ashraf 3, where he called for the U.S. to support the Iranian people "as they fight for a freer and more democratic Iran."