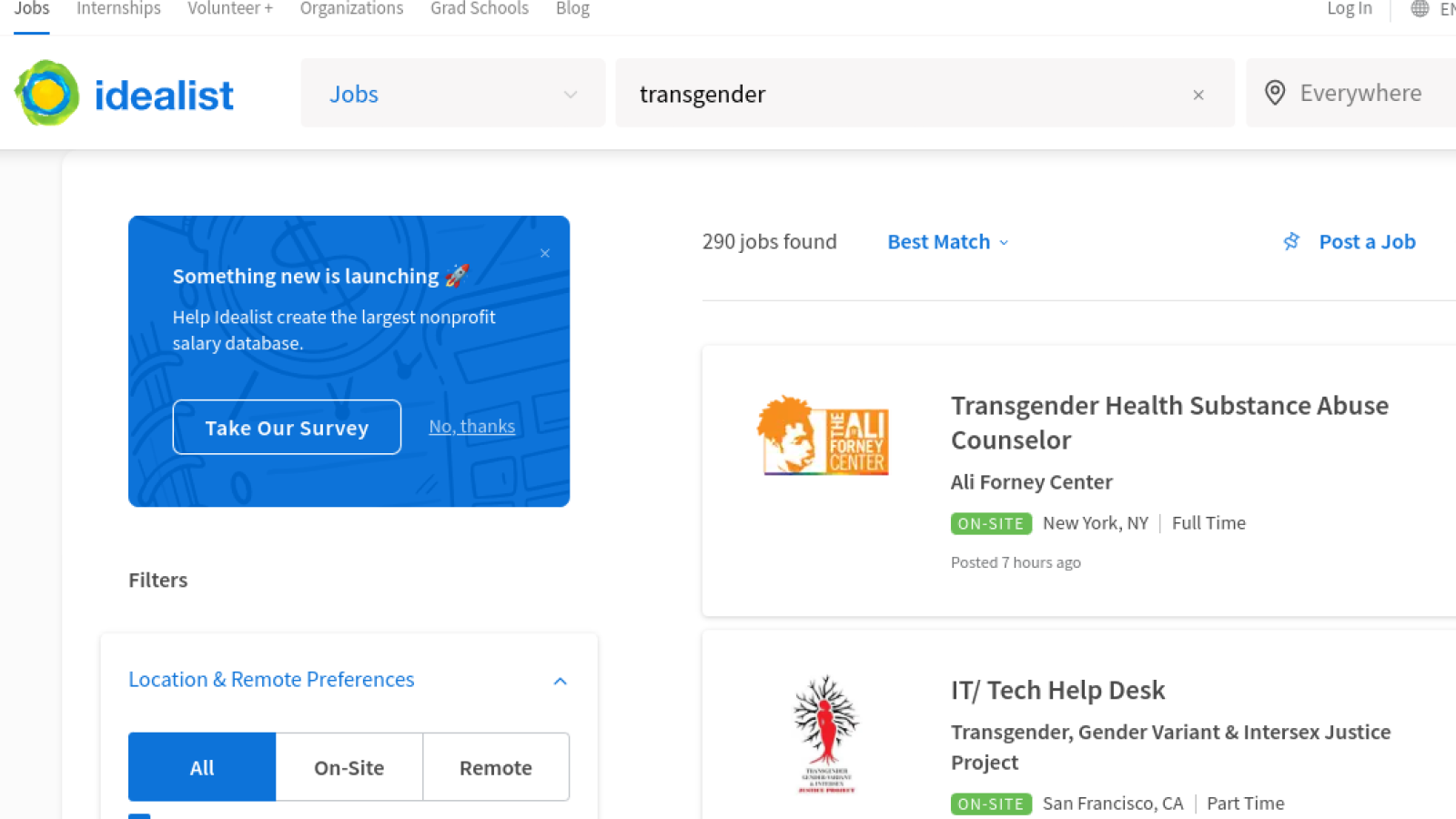 Gender-critical feminists who defend sex-based distinctions in law are facing another round of deplatforming, but this time they're getting lawyers involved.

The Women's Liberation Front got kicked off Idealist, a 26-year-old nonprofit that posts job listings, volunteer opportunities and grad school programs, less than three weeks after joining this month. The crowdfunding platform Givebutter locked out WoLF from its "Fifty States for Sex-Based Rights" campaign this spring.

Not all gender-critical removals stick. Following a query by Just the News in January, YouTube restored an activist's undercover videos that show gender clinics admitting to performing genital surgeries on minors who identify as the opposite sex.

The removals are a lower-visibility counterpart to the high-profile financial deplatforming of U.S. and U.K. gay rights groups that oppose dominant strains of advocacy in the LGBTQ movement, particularly on transgender issues.

In an email WoLF shared with Just the News, Idealist Executive Director Ami Dar told WoLF Wednesday that its "public-facing content does not fall within our community guidelines." The decision required "much thought," Dar said, refunding the group's paid job ad.

WoLF Executive Director Mahri Irvine asked how its listing for a policy director, whose work is primarily regulatory and legislative advocacy, violated the community guidelines, which extol Idealist as a "neutral space for people and organizations from all points of view" that "does not endorse or promote any program or organization over any other."

Like many job seekers on Idealist, WoLF seeks to address the "constant mistreatment and degradation of women and girls in the United States," Irvine said.

Dar told Just the News Thursday afternoon he could explain Idealist's reasoning on Friday, but WoLF sent him a letter on its lawyer's letterhead Thursday night, escalating the dispute. He then pledged a full response over the weekend.

"Unfortunately, Idealist.org has joined the growing list of organizations and vendors who are openly hostile and discriminatory toward women," Lauren Bone, who served as WoLF's in-house counsel before starting a private practice focused on sex-based rights with former Trump administration lawyer Candice Jackson, told Just the News.

The ACLU and Transgender Law Center "spend millions of dollars annually fighting against civil rights for women and girls [and] are permitted by Idealist.org to post jobs freely," she wrote in an email. Just the News found nearly 300 job listings for the search term "transgender" Friday — 17 alone in Washington D.C.

The removal of the policy-director posting "interferes with WoLF’s advocacy (perhaps intentionally)," Bone wrote to Dar late Thursday. "It is perplexing that Idealist.org ... would reject WoLF's widely shared positions to such an extreme degree that you would completely deplatform this charitable organization."

Bone pointed to WoLF's legal and cultural fights against biological males in women's prisons, coercion of "lesbians to accept male [transgender women] sexual partners, misogynistic male caricatures of womanhood" such as a transgender teacher with enormous prosthetic breasts, and "commercialization of women's reproduction and sexuality." It also favors abortion rights.

"[D]angerous men" who identify as women know their potential victims "risk being punished and 'cancelled' by entities such as Idealist.org if they object" to shared placement in prisons, dorm rooms, and domestic violence and homeless shelters, Bone wrote.

The victims WoLF serves are "disproportionately women of color and disproportionately lesbian or bisexual," she said, urging Idealist to support "single-sex correctional housing — because subjecting incarcerated women and girls to rape and pregnancy is inhumane and unconstitutional."

Dar has yet to respond to WoLF or Bone's letter, Irvine told Just the News Friday.

The letter doesn't allege that Idealist has violated a contractual obligation to WoLF or any other legal cause of action.

"While we do think that Idealist.org has violated its own terms of service, it is unlikely that WoLF would initiate legal action over this," Bone told Just the News. "The time and resources it would require at this time are better spent on legal and policy advocacy for women and girls."

But the terms also include an all-caps disclaimer: "WE DO NOT ENDORSE, APPROVE OR VERIFY ANY POSTED CONTRIBUTIONS AND WE SHALL NOT BE RESPONSIBLE OR LIABLE WHATSOEVER" for its users' contributions to Idealist.