News outlets including the New York Times have only just recently begun to explore the lab hypothesis. 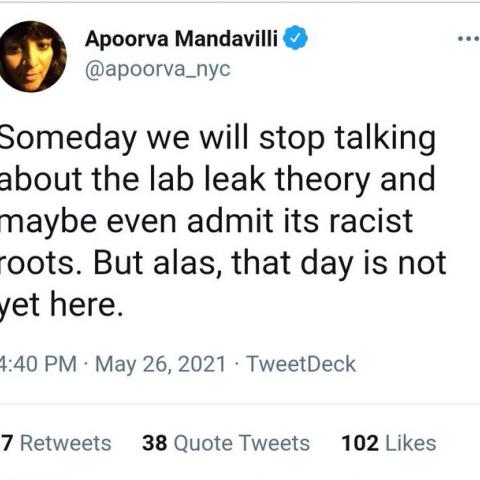 Apoorva Mandavilli, a longtime science reporter who has been a full-time writer at the Times since May of last year, suggested on Wednesday that growing suspicions that COVID-19 originated in a Chinese virology lab are both misguided and bigoted.

"Someday we will stop talking about the lab leak theory and maybe even admit its racist roots," she wrote on Twitter. "But alas, that day is not yet here."

Mandavilli subsequently deleted that tweet. In a followup post she did not retract her earlier claim about the theory's "racist roots" but rather said that it had been "badly phrased."

"The origin of the pandemic is an important line of reporting that my colleagues are covering aggressively," she wrote.

By Thursday evening Mandavilli's Twitter account appeared to be no longer active. She did not respond to inquiries seeking more information about her opinions on the theory and the reason for her account's disappearance.

Yet her suggestion that the lab-leak theory is both "racist" and unworthy of the discussion it has provoked may shed light on the pandemic coverage priorities of one of the world's most influential papers.

The lab-leak theory has been catapulted to the center of the COVID-19 crisis in recent weeks, being the subject of congressional inquiries, presidential directives and heightened media coverage.

Although evidence in support of the theory has been readily available since before the start of the pandemic, the Times's reporting on such clues — like that of most media outlets — has been relatively scant until recently. Only a handful of news outlets, including Just the News, began delving into the issue with any depth as early as last year.

It is unclear what happened over the course of the year to change establishment media coverage priorities.

The Times only just posted this "explainer" on the hypothesis on Thursday. As late as March of this year, the paper was denigrating former Centers for Disease Control and Prevention Director Robert Redfield for promoting what the paper deemed the "so-called lab theory" that had been "decried by many scientists" up to that point.

In May of last year, the paper claimed that "among scientists and especially virologists, there is largely agreement that the chances that a lab accident sparked the outbreak are slim." That same month the paper dismissed the hypothesis as a set of "unsubstantiated theories."

The lab-leak theory, of course, is still just a theory. Confirming or refuting it will almost certainly depend upon international investigators being granted high-level access to the Wuhan Institute of Virology, something that will be difficult to attain under the auspices of the highly secretive Chinese Communist Party. A World Health Organization investigative team earlier this year reportedly spent only one day at the lab interviewing lab officials.

Yet the key components of the theory and a possible U.S. funding tie-in to the leak have been known for many months or longer. The pieces of the lab-leak puzzle that have emerged in public reports include:

Whether or not the Times and other legacy news outlets will shift their considerable resources toward a more thorough investigation into the lab theory remains to be seen, though New York Times writer Frank Bruni this week suggested that the departure of President Donald Trump from the White House may have been the catalyst for a more widespread acceptance of the hypothesis.

Yet now, Bruni argued, "the truth must be pursued."