A consortium of four private groups worked with the departments of Homeland Security (DHS) and State to censor massive numbers of social media posts they considered misinformation during the 2020 election, and its members then got rewarded with millions of federal dollars from the Biden administration afterwards, according to interviews and documents obtained by Just the News.

The Election Integrity Partnership is back in action again for the 2022 midterm elections, raising concerns among civil libertarians that a chilling new form of public-private partnership to evade the First Amendment's prohibition of government censorship may be expanding.

Three liberal groups — the Democratic National Committee, Common Cause and the NAACP — were also empowered like the federal agencies to file tickets seeking censorship of content. A Homeland-funded collaboration, the Elections Infrastructure Information Sharing and Analysis Center, also had access.

In its own after-action report on the 2020 election, the consortium boasted it flagged more than 4,800 URLs — shared nearly 22 million times on Twitter alone — for social media platforms. Their staff worked 12-20 hour shifts from September through mid-November 2020, with "monitoring intensif[ying] significantly" the week before and after Election Day.

The tickets sought removal, throttling and labeling of content that raised questions about mail-in ballot integrity, Arizona's "Sharpiegate," and other election integrity issues of concern to conservatives.

The consortium achieved a success rate in 2020 that would be enviable for baseball batters: Platforms took action on 35% of flagged URLs, with 21% labeled, 13% removed and 1% soft-blocked, meaning users had to reject a warning to see them. The partnership couldn't determine how many were downranked.

The First Amendment to the U.S. Constitution prohibits Congress from passing any laws that abridge free speech, and courts have ruled that prohibition extends to federal agencies funded by the legislative branch. Participants were acutely aware that federal agencies' role in the effort strayed into uncharted legal territory.

For instance, SIO's Renee DiResta said in a CISA Cybersecurity Summit video in 2021 that the operation faced "unclear legal authorities" and "very real First Amendment questions." She joined SIO from a firm exposed by The New York Times for creating "a 'false flag' operation" against Republican Senate candidate Roy Moore.

Mike Benz, an ex-State Department official who was slated to be the department's first-ever digital freedom ambassador if President Donald Trump had won a second term, discovered much of the consortium's work in research for his new Foundation for Freedom Online, a nonprofit which advocates for free speech globally while monitoring growing U.S. censorship.

He told Just the News the consortium was the largest federally-sanctioned censorship operation he had ever seen, a precursor to the now-scrapped Disinformation Governance Board and one that is likely to grow in future elections.

"If you trace the chronology, you find that there was actually 18 months' worth of institutional work to create this very apparatus that we now know played a significant role in the censorship of millions of posts for the 2020 election and has ambitious sights for 2022 and 2024," he said.

Rep. Andrew Clyde (R-Ga.), a member of the House Homeland Security Committee, called the revelations "stunning" and said the 2020 operation amounted to the federal government sanctioning and outsourcing censorship.

"The government knows that they cannot do it by themselves because of the First Amendment of the Constitution, which prohibits it," Clyde told the "Just the News, Not Noise" television show. "And then they decide to partner with another entity, a private entity. a social media platform or university.

Clyde said he expects Republicans to investigate the consortium next year if they gain control of Congress and that he is drafting legislation called the Free Speech Defense Act to address censorship issues.

"This bill would prevent the federal government from labeling anything through a proxy entity, like a social media company, as disinformation, labeling it as misinformation or labeling it as true," he explained. "And then it would also give an opportunity for those people who have been injured by it to take legal action."

Homeland Security, CISA, EIP and the Stanford and UW projects did not immediately respond Thursday to a request for comment from Just the News.

It wasn't just blogs and individual social media users whose content was targeted for removal and throttling as "repeat spreaders" of misinformation. News and opinion organizations, including the New York Post, Fox News, Just the News and SeanHannity.com were also targeted.

The partnership's members published the 292-page public report in March 2021, though the most recent version is dated June 15, 2021. The launch webinar featured former CISA Director Christopher Krebs, "who led the effort to secure electoral infrastructure and the response to mis- and disinformation during the election period."

"I think we were pretty effective in getting [platforms] to act on things they haven't acted on before," both by pressuring them to adopt specific censorship policies and then reporting violations, SIO founder and former Facebook Chief Security Officer Alex Stamos told the launch webinar. (He and Krebs started their own consultancy after the election.)

"Platform interventions" in response to "delegitimization of election results," for example, went from uniformly "non-comprehensive" in August 2020 to "comprehensive" by Election Day, the report says.

The partnership has not drawn widespread attention, however. Congressional testimony has approvingly cited the report, which was also filed as evidence in a lawsuit against Massachusetts officials for allegedly deplatforming a Twitter user.

Benz's Foundation for Freedom Online brought new scrutiny on the partnership in August and shared its own summary of the report with Just the News, with links to primary documents and background on CISA and its private partners.

FFO spent "16 weeks mapping virtually every element of DHS partnerships and operations connected to Internet censorship," including the partnership's report, Benz wrote, pledging to dribble out "revelations" from FFO's research over several months. It has already published assorted video evidence.

"DHS's Ministry Of Truth has evaded public attention for so long [because] it acts like a coordinator of a censorship network, rather [than] an implementer of specific censorship acts," similar to how the CIA and Pentagon "outsource" wars to private military contractors, he said.

SIO officially launched the partnership 100 days before the election, "in consultation with CISA and other stakeholders," the partnership report says. It attributes the idea to SIO-funded interns at CISA, noting that censorship by that agency and domestic social media monitoring by intelligence agencies would likely be illegal.

The partnership said it limited itself to flagging social media content "intended to suppress voting, reduce participation, confuse voters as to election processes, or delegitimize election results without evidence," the latter cited in 72% of all tickets.

It wasn't enough to be provably false, however. Simply "exaggerating [the] impact" of factual information was enough to be reported. The flagged content most likely to draw action by tech platforms was "misleading statistics."

A graphic on "cross-platform participatory misinformation" suggests the purpose was to stop content from reaching a "virality threshold" where it could lead to "IRL [in real life] actions": protests, legal action and "mainstream coverage." 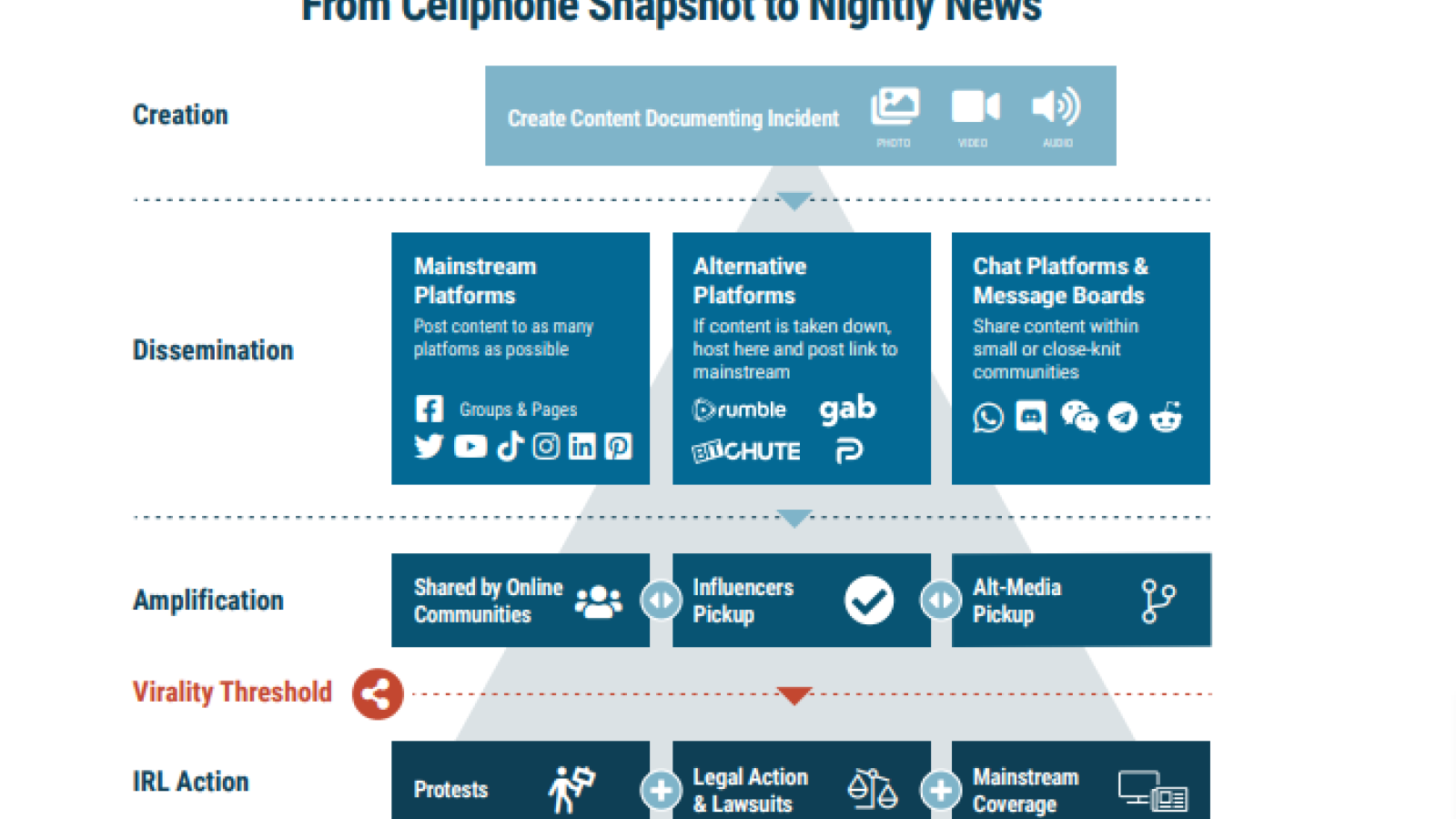 During the launch webinar, the Atlantic Council's Emerson Brooking said they wanted to stop the "amplification and legitimation" of "far-right influencers [who] would be doing all they could to try to catch the eye of a Fox News producer," making it likely that President Trump, "the social media death star," would see their content.

Government entities were involved in real-time chats with the partnership and social media platforms over specific content under review.

A chat screenshot in the report shows an unidentified government partner rejecting the Sharpiegate claim that "sharpies aren't read at all" by ballot-counting machines, and a platform provider responding that it was now reviewing those claims.

The partners all received federal grants from the Biden administration in the next two years.

UW's press release about the award noted their earlier work on the partnership and praise for the report from ex-CISA director Krebs, who called it "the seminal report on what happened in 2020, not just the election but also through January 6."

Graphika, also known as Octant Data, received its first listed federal grant several weeks after the 2020 election: nearly $3 million from the Department of Defense for unspecified "research on cross-platform detection to counter malign influence." Nearly $2 million more followed in fall 2021 for "research on co-citation network mapping," which tracks sources that are cited together.

The Atlantic Council, which hosted then-Vice President Joe Biden for a keynote address at its 2011 awards dinner, has received $4.7 million in grants since 2021, all but one from the State Department. That far exceeds the think tank's federal haul in previous years, which hadn't approached $1 million in a single year since 2011.

Those figures don't include the federal contracts for each partnership member. Graphika/Octant, for example, received nearly $100,000 in 2021 for its "Contagion Monitor" surveillance and services that use "advanced network science to analyze PRC [Chinese] influence."

The government "consultation" on censorship stands in stark contrast to recent media coverage of SIO and Graphika.

The Washington Post said an August report by the two organizations exposed years of "covert campaigns" to promote American interests abroad by fake social media accounts, which Facebook and Twitter had repeatedly taken down for alleged U.S. military ties. The Pentagon is reportedly auditing its "internet information operation" in response.

Graphika and its cadre of former U.S. intelligence agents was the subject of a critical profile in February by The Washington Standard, which dubbed it "The Deep State's Beard for Controlling the Information Age."

The report also noted Graphika's work on the election partnership with the other organizations, and that SIO's founder Stamos is an adviser to NATO's Collective Cybersecurity Center of Excellence.

The Department of Homeland Security, CISA, Election Integrity Partnership and its two leaders, the Stanford Internet Observatory and UW's Center for an Informed Public, didn't respond to queries about the new scrutiny.

Large number of criminal juveniles entering US through DACA