'Once I learned how that network felt about Black Lives Matter, I was disgusted and knew it was completely unacceptable to me,' Mike Gundy said in a video posted on Tuesday.

Oklahoma State head football coach Mike Gundy on Tuesday posted a video apology after the uproar over a photograph of him wearing a T-shirt emblazoned with the logo of the conservative One America News Network.

In the video Gundy said that he had met with his team. "They helped me see through their eyes how the T-shirt affected their hearts," he said. "Once I learned how that network felt about Black Lives Matter, I was disgusted and knew it was completely unacceptable to me. I want to apologize to all members of our team, former players and their families for the pain and discomfort that has been caused over the last two days.

Running back Chuba Hubbard retweeted Gundy's video and called it "a step in the right direction."

Hubbard on Monday had tweeted his displeasure about a photograph of Gundy wearing a One America News Network T-shirt on a fishing trip.

"I will not stand for this," Hubbard wrote. "This is completely insensitive to everything going on in society, and it’s unacceptable. I will not be doing anything with Oklahoma State until things CHANGE."

Hubbard was retweeting CBS Sports writer Kyle Boone who in a second tweet also pointed to comments Gundy had previously made about the network.

But later on Monday Hubbard and Gundy appeared together in a video.

"I'm looking forward to making some changes, and it starts at the top with me," Gundy said during the video. He noted that he had met with some players.

Hubbard said he should have gone directly to Gundy rather than tweeting. He also said that they will "focus on bringing change, and that's the most important thing." 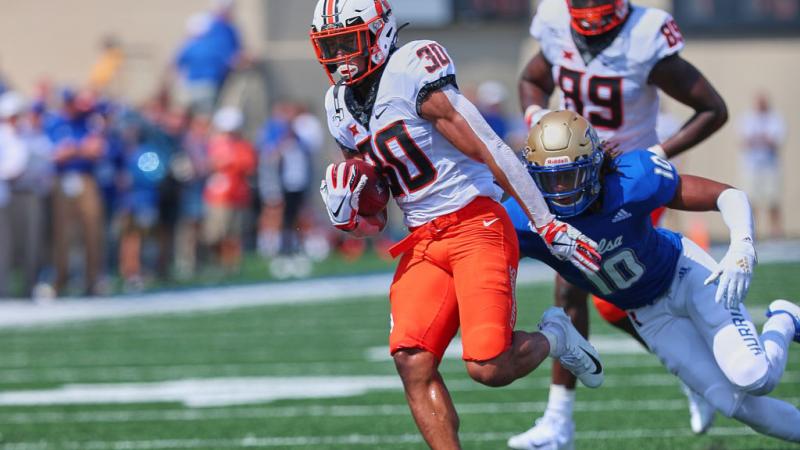