Declaration is call to "return to public health practice supported by data and science," says one signatory.

Six weeks after it was first published, the Great Barrington Declaration — an international pronouncement meant to shine light on what it calls the "damaging physical and mental health impacts of the prevailing COVID-19 policies" — has garnered nearly 700,000 signatures from scientists, academics, doctors and citizens worldwide, with more signatories being added each day as a fresh spate of lockdowns continues across Europe and parts of the United States.

Regional and nationwide lockdowns have been an international feature of the COVID-19 pandemic since almost the start of the year. At the outset of the pandemic, China instituted a severe lockdown of the Hubei province where the disease first originated. Global health officials were initially skeptical of the Chinese lockdown, which went against many major established pandemic guidelines.

As the virus spread west into Europe and the United States, however, many heads of state began instituting their own lockdowns, with major countries such as Italy, Spain and the United Kingdom instituting broad stay-at-home orders, business shutdowns, school closures and other unprecedented policies in order to prevent a modeled catastrophic death toll.

In the United States, President Trump declined to impose a national lockdown, but throughout March and April governors and local leaders across the country issued their own shutdown orders, some of them lasting for months at a time. The ongoing fall spike of positive COVID-19 tests, meanwhile, has been followed by governors reimposing some of those measures after they were loosened over the summer.

Lockdown policies 'yield more damage than the disease itself'

Many public health officials, scientists, epidemiologists and other experts have been broadly supportive of these measures, with many arguing that they are necessary to avoid huge death rates, overwhelmed medical systems and destabilized societies.

Yet the Great Barrington Declaration has, in the relatively brief period since its Oct. 4 publication, managed to snag several dozen thousand signatures from experts in those fields and others who believe the lockdowns are causing, in the words of the declaration, "irreparable damage."

The ideal policy, according to the signatories, is "to allow those who are at minimal risk of death to live their lives normally to build up immunity to the virus through natural infection, while better protecting those who are at highest risk."

"Those who are not vulnerable should immediately be allowed to resume life as normal," the document continues, arguing that "schools and universities should be open for in-person teaching" and "extracurricular activities, such as sports, should be resumed." Work should be in-person as well, it adds, while restaurants, storefronts, art exhibits and other cultural activities should be permitted to resume normal operations.

In many areas throughout the world, that advice has gone largely ignored over the past month and a half. Yet multiple signatories to the document this week still stood by their endorsement of its aims.

Boris Kotchoubey, a medical psychology professor at the Universiy of Tubingen who has affixed his signature to the proclamation, told Just the News: "I signed the Declaration ... because I share the views formulated in it."

"Anti-Corona measures in all countries that I know (mostly, West Europe) are non-directed, imprecise and, therefore, yield more damage than the disease itself," he said.

"Actually, we know more or less where the infection is spread," he continued. "(1) big events like high level sport events, rock concerts etc.; (2) loud parties; (3) activities in closed rooms, particularly with screams or songs (worship); (4) public transportation, particularly in big cities; (5) last but not least invasion of the infection in retirement homes.

"Efficient measures should be directed to the prevention of infection in THESE situations," he wrote. "Instead, for example, the German  government forbids theaters and restaurants, although there is not the slightest evidence that anybody has been infected in such places, because all of them had highly developed sanitary concepts (e.g., since May all seats in theaters are at least 2 meters from each other;
etc.; the same in restaurants)."

Rodney Sturdivant, another signatory and the director of Baylor University's Statistical Consulting Center, echoed those criticisms of lockdown policies.

Epidemiological research "does not reflect what has been reported and cited as justifying many policy decisions," he told Just the News. He described the Declaration as "a call to return to public health practice supported by data and science."

"An important public health principle is to not ignore the totality of public health with fixation on a single aspect," he said. "The consequences of doing so is catastrophic. We are already seeing the impacts: mental health issues, missed cancer treatments, missed immunizations, hunger, drug overdose, domestic abuse, incredible harm to children ... the list is tragically long and preventable."

"Continuing with current approaches will lead to far more harm than Covid will produce," he said.

Apart from the Declaration itself, a variety of other health officials have warned of the effect that lockdowns are having on non-virus related aspects of public health. Parents in the U.S. over the course of the lockdowns here have reported "behavioral issues that previously their children had not exhibited," WebMD Chief Medical Officer John Whyte told Fox News this week. Whyte attributed those issues to the "loneliness, anxiety and anger" he said many children are experiencing during school closures and stay-at-home orders.

The New York Times last week, meanwhile, reported on the deleterious mental health effects that lockdowns can have on younger individuals. Recent research, for instance, suggests that adolescents in the Netherlands over the course of that country's shutdown experienced "a significant increase in severe anxiety and sleeping problems," the paper reported.

Experts have also warned that delayed medical treatments could contribute to significant spikes in mortality following the eventual conclusion of the pandemic, at which point medical conditions normally detected by early screenings may have progressed too far to be adequately treated.

Still, comparatively few health officials and scientists have spoken out publicly against lockdown measures. One motivation for staying silent might be fear of reprisal: Those who have been critical of the prevailing consensus of COVID shutdowns have often been publicly villified as being insufficiently concerned about the pandemic. American surgical oncologist David Gorski, for instance, last month called the signatories of the Great Barrington Declaration "COVID-19 deniers," comparing them to "creationists, HIV/AIDS denialists, and climate science deniers."

That sort of negative publicity can have adverse professional effects, as Sturdivant found out after he signed the Declaration. He shared with Just the News an email he received from some colleagues with whom he was participating in a "large multi-institution grant proposal." The colleagues said that the stances of both the foundation funding the project and the project's program officer could jeopardize the initiative's success due to Sturdivant's participation in the Declaration.

"At this time, given the quick deadline for this project, we think it would be best to pause collaboration in light of what we know about this funder and program officer," they wrote to Sturdivant. "We hope there will be opportunities to collaborate in the future."

Sturdivant said he eventually resumed working with those colleagues, but he said fear of opposing viewpoints is "too typical in academia."

"Fear/panic due to misreporting of data and science are resulting in actions that mislead people into a false notion about non-scientific 'solutions' that do not work," Sturdivant said. The Great Barrington Declaration, he added, "comes at a critical time in trying to rectify these issues." 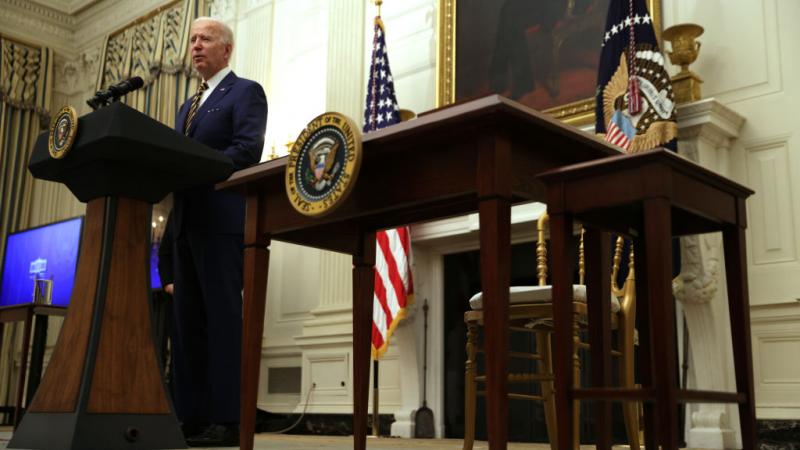 Biden says there's 'nothing' the U.S. can do to counteract COVID 'in the next several months'