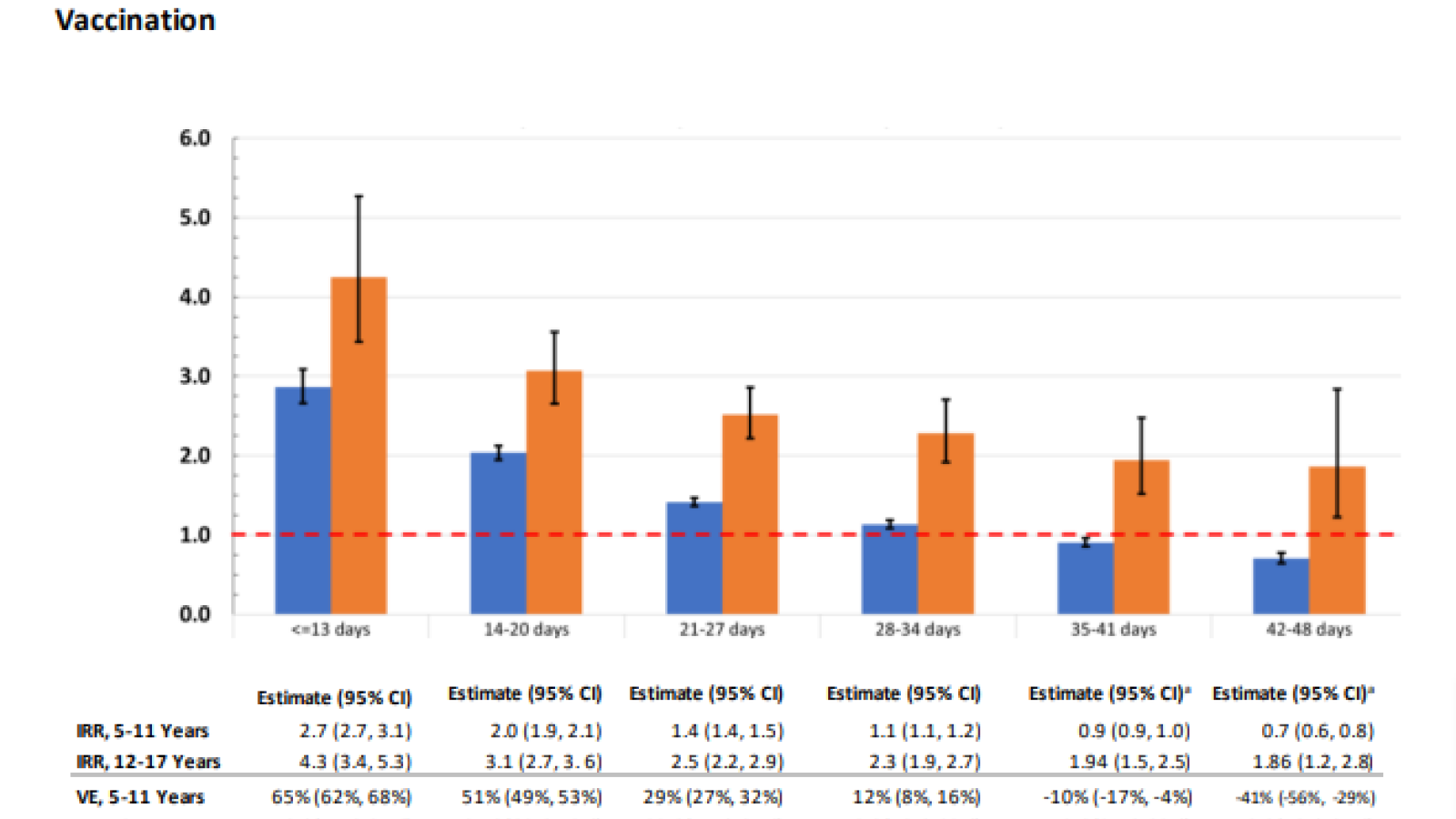 The efficacy of Pfizer's mRNA COVID-19 vaccine for the youngest population authorized to receive it turns negative by the sixth week after full vaccination takes effect, according to buried findings in a study of more than 1.2 million New York children since the Omicron variant's emergence.

The preprint, which has not been peer-reviewed, was written by New York Department of Health and University of Albany researchers, including Eli Rosenberg, deputy director for science in the Office of Public Health and UA epidemiologist.

A graph appears at the bottom of the final page comparing COVID cases among unvaccinated children Jan. 3-30 to their "newly fully-vaccinated" peers Dec. 13-Jan. 2. They are split into two age groups, 5-11 and 12-17, and measured for seven weeks. (About 70% of the population was 12-17.)

Starting at day 35, vaccine efficacy (VE) goes negative for 5-11 year-olds and gets worse over time, meaning they are progressively more likely to be infected than unvaccinated peers.

And they still recommend vaccination for the youngest authorized group, because they were protected "against severe disease" even with that lower dose. VE against hospitalization fell from 85% to 73% for the older group, and from 100% to 48% for the younger.

"These results highlight the potential need to study alternative vaccine dosing for children and the continued importance [of] layered protections, including mask wearing, to prevent infection and transmission," according to the conclusion. (CDC Director Rochelle Walensky often promotes "layered protection" or similar wording.)

But negative VE was also observed in a peer-reviewed CDC study published in the Journal of the American Medical Association in January. It found that unboosted adults were more likely to have symptomatic Omicron infections 7-10 months after vaccination than peers who were unvaccinated, with Pfizer's vaccine performing worse than Moderna's.

Pfizer CEO Albert Bourla has also said Omicron rendered its vaccine nearly impotent against infection and only "reasonable" against hospitalization.

Regardless of the explanation, the New York paper could throw a wrench in COVID vaccine mandate plans in schools.

California Gov. Gavin Newsom has mandated COVID vaccination for all schoolchildren, with medical, religious and "personal" exemptions, when the FDA fully approves them for each age group.

A bill (SB-871) offered by California Sen. Richard Pan, a pediatrician, would go further by requiring full immunization under emergency use authorization while banning personal and religious exemptions.

The New York study drew scrutiny for how it was designed, presented and reported.

It's telling that the researchers don't mention deaths, "which is not surprising, since Covid childhood mortality is min[u]scule," former Harvard Medical School epidemiologist Martin Kulldorff, a pioneer in vaccine safety, told Just the News.

"To prevent infection is not an important outcome that we should vaccinate for," and waning efficacy might not be specific to Omicron, he wrote in an email. One explanation for the negative VE might be that "kids will get infected sooner or later, so the vaccine just postpones it a little."

The hospitalization figures were "the only interesting" part of the paper, he said: "not statistically significant for the 5-11 year olds despite a huge sample size" and still low in the older group. The results suggest the younger population should not be vaccinated, while the older group would get "no major benefit."

The study makes clear there's no "scientific case" for children to be subject to vaccine requirements, which are "borderline delusional" in schools, University of California San Francisco epidemiologist Vinay Prasad said in a YouTube video.

He questioned how news coverage portrayed the study's findings on VE and hospitalizations, particularly for 5-11 year-olds. The confidence interval for that group not only "spans the null," meaning vaccines might have no effect, but it's huge: -12% to 75%. That could actually be good news because "there are very few cases in that cohort."

Prasad isn't sold that the dosing difference fully explains the VE difference between the younger and older groups: "I'm not sure they have enough [statistical] power to really see that difference" and may instead be "anchoring" to statistical noise.

Robert Malone, the mRNA vaccine pioneer-turned-critic, claimed in his newsletter Tuesday the paper would never pass peer review and should actually be taken down. It's especially problematic that it has no "conflict of interest" statement, he said.

The researchers "are basically PhD and MD public health bureaucrat/officers of the State of New York," and one has published often in recent months in the CDC's Morbidity and Mortality Weekly Report, Malone noted. MMWR is not peer-reviewed and has faced increasing challenges to the quality of COVID research it publishes.

The report's conclusions aren't supported by its data, he claimed, citing an endorsement of mask wearing without any basis in the study's results.

Corresponding author Vajeera Dorabawila, co-director of the Department of Health's Bureau of Surveillance and Data Systems, didn't immediately answer a request to respond to appraisals of the study.

Asked if the government was 'lying or guessing' about COVID vax data, Birx admits: 'I don't know'

CDC gives final approval for infants, toddlers and preschoolers to get COVID-19 vaccines