Despite earning a big salary and spending lavishly, Rep. Alexandria Ocasio-Cortez (D-N.Y.) paid off less than $2,000 of her student loans between September 2019 and December 2021.

Rep. Alexandria Ocasio-Cortez (D-N.Y.) has often spotlighted her own student loans since entering Congress, personalizing a hot-button issue to decry a system that saddles millions of people with debt coming out of school.

However, unlike most Americans struggling to pay off student loans, Ocasio-Cortez, 32, has spent her money lavishly and appears to be in a position to pay off her full debt at any time, according to a review of her student loan history.

As of 2020, Ocasio-Cortez owed between $15,001 and $50,000 in federal student loans, according to her most recent personal financial disclosure report, which was filed in August 2021.

Two years earlier, in September 2019, Ocasio-Cortez made a student loan payment during a congressional hearing.

If Ocasio-Cortez's statements are true, then she paid off less than $2,000 of her student loans between September 2019 and December 2021.

She also spent a good deal of money on rent for those two-plus years. Indeed, the 32-year-old lives in a luxury high-rise apartment building in Washington, D.C. where monthly rents range from at least $2,000 for a studio apartment to more than $5,000 for a three-bedroom.

Amenities for the complex include saunas, several pools, multiple gyms, racquetball courts, massage rooms, a golf simulator, and a rooftop dog park, among others.

The congresswoman also has a second residence in her home district in New York City.

As a member of Congress, Ocasio-Cortez makes $174,000 a year — about two-and-a-half times the median income for U.S. households. However, she still hasn't paid off her student loan balance, despite her salary, a 0% interest rate, and now owing much less than the nearly $30,000 (exact figures vary depending on the source) that the average graduate owes.

It's unclear why. Ocasio-Cortez didn't respond to a request for comment for this story. Just the News asked her office several questions, including whether she's on a payment plan for her student loans and why she hasn't paid off her debt given her apparent ability to do so.

While not speaking to Just the News, Ocasio-Cortez has been quite vocal about her own student loan debt. Since first being elected, she's often cited it, portraying herself as a struggling young woman waiting tables to make ends meet, with student loans making the struggle unwinnable.

"It was literally easier for me to become the youngest woman in American history elected to Congress than it is to pay off my student loan debt," the congresswoman said in 2019.

"I'm 32 years old now,” she added in December on the House floor. "I have over $17,000 in student loan debt, and I didn't go to graduate school because I knew that getting another degree would drown me in debt that I would never be able to surpass. This is unacceptable."

Dozens of members of Congress have student loans, not just Ocasio-Cortez, according to Roll Call.

Ocasio-Cortez and several other Democrats have been pushing President Biden to cancel up to $50,000 in debt per borrower through executive action. Currently, some 43 million Americans owe $1.75 trillion in student loan debt.

Biden has expressed skepticism about having the legal authority to take such a step, although he campaigned to cancel up to $10,000 of student debt per borrower. Last year he asked the Department of Education to prepare a memo on his ability to do so up to $50,000. In January, dozens of lawmakers demanded the memo's release in unredacted form, to no avail.

"Do we really think a billionaire's child is taking out student loans?" she asked in December. "If you are taking on student loan debt, it's because you are likely a middle or working-class person. Let's get real, let's cancel it."

Analysts have found that, despite Ocasio-Cortez's claims, canceling student debt would actually benefit the affluent.

According to the Urban Institute, the wealthiest quarter of the population holds more than one-third of all education debt, while the lowest earning quarter holds only 12%.

"Debt forgiveness plans would be regressive — providing the largest monetary benefits to those with the highest incomes," the institute wrote.

Nonetheless, Ocasio-Cortez has been advocating the cancellation of at least billions of dollars in student loan debt, slamming President Biden in recent weeks for his approach to the issue.

On Tuesday night, Ocasio-Cortez called out Biden for not addressing student loan debt in his State of the Union address, describing the speech as a "lost opportunity" in which he "glossed over" key issues.

Two weeks earlier, Ocasio-Cortez warned Biden must do more to cancel student loan debt for Democrats to have "any chance" of keeping their congressional majority in November's midterm elections.

The Biden administration has touted that it has discharged around $15 billion in student debt to more than 675,000 borrowers. In December, Biden extended the federal student loan repayment moratorium, which began during the COVID-19 pandemic, until May 1. The White House hasn't said whether Biden will extend it again.

Critics have argued that student loan cancellation presents a potential conflict for lawmakers who stand to gain from having their debt obligations forgiven or reduced. In January, the New York Post reported that, beyond Ocasio-Cortez, several other Democratic lawmakers pushing to cancel student loans have such debt themselves.

"It definitely seems like a conflict of interest to me," attorney Harmeet Dhillon, who currently serves as chair of the Republican National Lawyers Association, told the Post. "Rep. Ocasio-Cortez is single, has no children, and is earning almost $200,000 in salary and benefits. She should be setting an example for her constituents and paying down her debts." 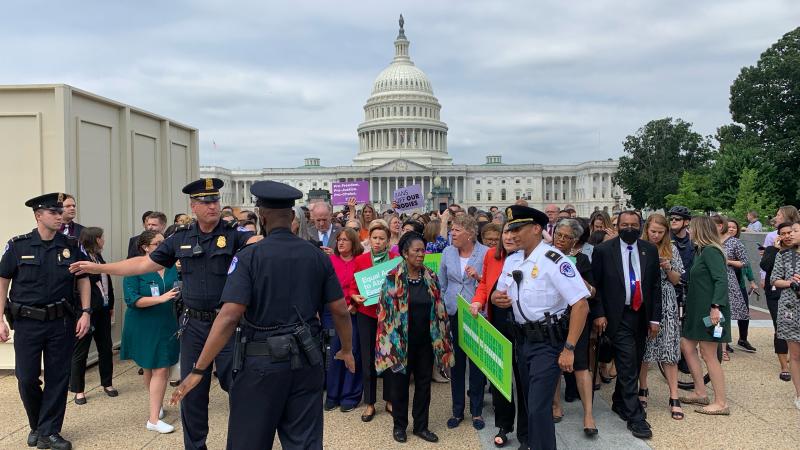